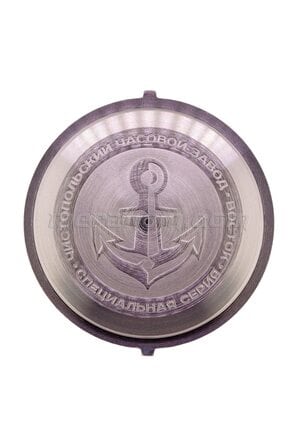 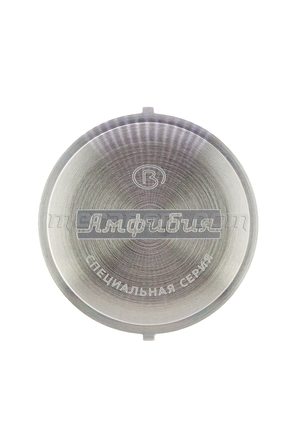 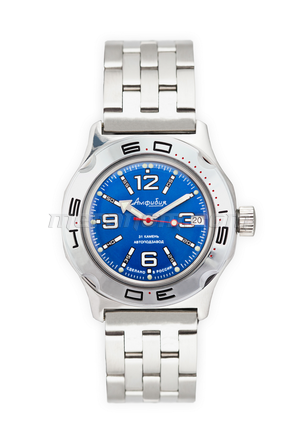 5012Р.
Mechanical Watch Vostok Amphibian Classic 100316. Vostok 2416 automatic movement. This watch has both a manual winding as well as an automatic winding. Screw-down crown (steel). Water resistance 20 atm (200 meters) - i.e. can be used for diving. In a set: watch, passport for a product, classic indiv..
Add to Cart 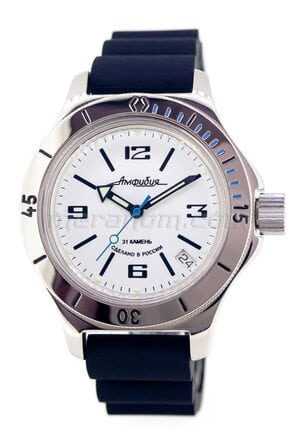 5012Р.
Mechanical Watch Vostok Amphibian Classic 120847. Vostok 2416 automatic movement. This watch has both a manual winding as well as an automatic winding. Screw-down crown (steel). Water resistance 20 atm (200 meters) - i.e. can be used for diving. In a set: watch, passport for a product, classic indiv..
Add to Cart 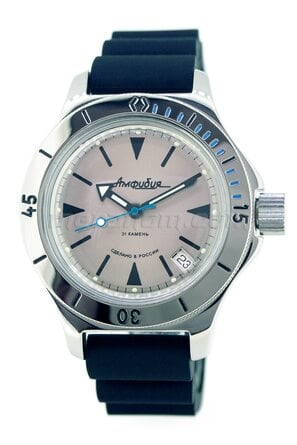 5012Р.
Mechanical Watch Vostok Amphibian Classic 120849. Vostok 2416 automatic movement. This watch has both a manual winding as well as an automatic winding. Screw-down crown (steel). Water resistance 20 atm (200 meters) - i.e. can be used for diving. In a set: watch, passport for a product, classic indiv..
Add to Cart 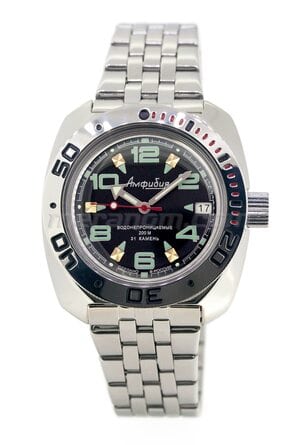 5012Р.
Mechanical Watch Vostok Amphibian Classic 710334. Vostok 2416 automatic movement. This watch has both a manual winding as well as an automatic winding. Screw-down crown (steel). Water resistance 20 atm (200 meters) - i.e. can be used for diving. In a set: watch, passport for a product, classic indiv..
Add to Cart 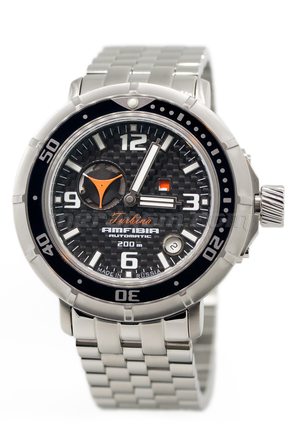 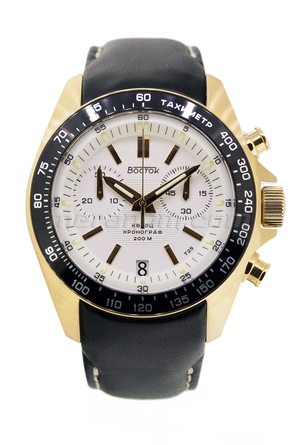 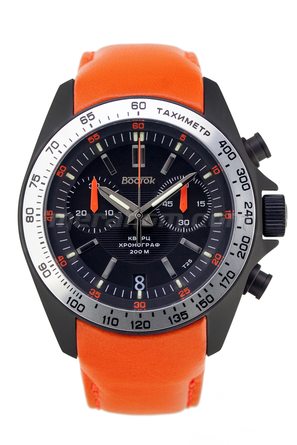 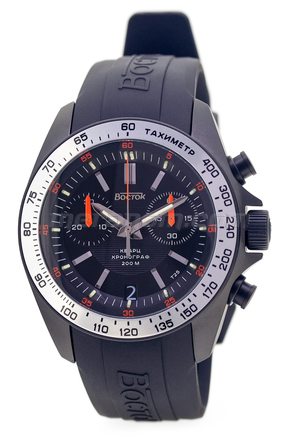 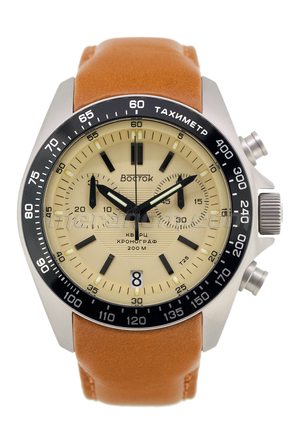 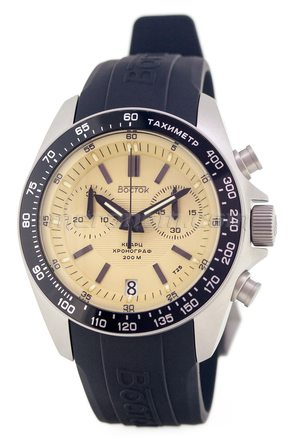 Our company story starts back in 1942 when one of the Moscow watch-making plants was evacuated from Moscow to our little town located on The Kama River. Defense equipment was the only company output during war years, but as soon as the war was over we started making mechanical wrist watches - our main production item ever since.

Yet, we never backed away completely from our military past - the company was appointed an official supplier of watches for the Defense Department of the Soviet Union in 1965. This year marks the creation of the world-famous "Komandirskie" ("Commander") watch.

Military watch grew very popular even with people who were unaware which end of the gun bullet comes off, mainly due to high precision, excessive reliability and durability. The appearance of the watch also contributes to its appeal - functional and clear-cut design invoked the feeling of belonging to the tough world of combat professional.

The experience we gained through development of the army watch was the foundation of our next special watch - "Amphibian". This impressive timepiece in stainless-steel case endured the depth of 2000 meters - kind of a wrist submarine. Success of the professional watches determined the company's present philosophy - to create mechanical watches maintaining precise timekeeping at any temperature, in any environment, surviving heavy pressure and blows.

The viability of the chosen strategy is now time-proven. A vast multitude of people both in Russia and abroad boasting "Vostok" watches and various international prizes awarded for high quality and commercial success testify to this. Still, we are far from being self-content with our achievements. We are always trying to look ahead, pursuing new ways to broaden our market presence.


The synergy of traditional "Vostok" austere design and the world's latest watch-marking trends is a cornerstone of this new project launched into the oncoming century. Time goes by, bringing changes into everything - we introduce innovative technologies, new styles of watches, one generation of watchmakers follows another.

Yet, one thing remains unchanged with us - as fifty years ago we make for you timepieces you can rely upon.

1942.
July 1, in Chistopol Glavpribor watch factory NK MV 835, created on the basis of the Second Moscow watch factory and DOS factory, has earned in full force, manufacturing producs for needs of front.

1943.
Release of a K-43 man's watch and instrument production are begun. The machine-tool construction for watch manufacture is organized.

1949.
Serial release of a K-26 "Pobeda" man's watch, wall-mounted ship clocks with a luminous dial, clocks for a/m "ZiM", "Volga", "Pobeda", wall-mounted and street industrial clocks are begun. On July, 1950 the factory has started construction of own industrial buildings.

1952.
The factory began release of "Kama" shock-proof watches in water-proof case, clock devices for various branches of a national economy.

1962.
Precision watch "Vostok" are awarded with the big gold medal of the Leipzig international fair. "Komandirskie" watches are developed and started in manufacture and Chistopol watch factory became the official supplier of these watches to the Ministry of Defence of the USSR.

1968.
Release of "Amphibian" watches is mastered. Since 1969 all watch of a factory are manufactired under "Vostok" trade mark, and the factory began to refer "Chistopol watch factory "Vostok".

1972.
Release of a new 24 calibres man's watch with a numerical calendar, a double calendar, with automatic movement are begun. Watches are exported to 54 countries of the world.
1976.
Cosmonaut G.Grechko during visit on a factory thanks watch-makers for release of qualitative products and gives to chistopol watch makers the "Vostok" watch which has visited the space.

1980.
This year the factory issues the plenty of a watch - 4,5 million pieces. All production only the first and supreme categories of quality.

1986.
Release of water-meters, tahografov accustoms, release of manometers are begun. The factory passes in the Ministry of the radioindustry. Chistopol faculty “Vostok” of Kazan Aircraft University is opened.

1989.
The factory passes to self-financing, in 1990 - on rent. The assortment of watches is annually updated on 70%, release of watches with custom-made symbolics is mastered. Export of wathces increases.

1992.
The factory passes under jurisdiction of Republic Tatarstan and becomes Open Joint Stock company. Small enterprises on manufacture of completing for watches are created. The big parties of watches are exported to Italy, USA, Switzerland. In USA the greatest popularity was received with "Desert storm" watch.

2000.
Vostok Watch Makers Inc. is the leader of the domestic watch and clock industry on volumes of release and sales of a man's watch. Release of the female watches, expensive, prestigious man's watch, a quartz alarm clock are begun.

2004.
Popular watches "Komandirskie" have got modern design and more complex mechanism. The enterprise is certificated on the Russian and international quality standards of GOST Р and JQ Net. Delivery of watches and clocks in the countries of Europe is started. In September 2004 is became the presentation of the new joint venture "Vostok-Europe" created with Lithuanian enterprise "Koliz" for purchase of watches to the countries of the European Community.

The first Amfibia watches were manufactured in 1967 in the USSR by Vostok Watch-Maker Inc. The watches that became the symbol of all Soviet 60th-70th. Professional seamen, divers and submariners gave their preference to Amfibia because of their simplicity and reliability. Organized in 1942, Vostok Watch-Maker Inc. especially to its own jubilee and to the 40th anniversary of creation the first Amfibia watches has issued a collection series of them. This Amfibia-1967 recreated under old sketches and drawings, transmits the spirit of that epoch with all its outward appearance and continues to follow horology traditions. Each watch from limited edition series in 1967 pieces has its unique number on the back cover and a signature of the master who has assembled it in the accompanying certificate.